Please consider signing and sharing this Change petition set up by Ginger Gorman. Many freelance journalists have seen their work being ripped off by unscrupulous publishers and sadly by other journalists. Despite being a clear copyright breach in many instances, it’s up to the person whose work has been copied to prove the case. For large publishers, this means spending time, resources and money on prosecuting a case; for freelance journalists, it’s usually not financially feasible. Those who blatantly copy know they can get away with it – because they have for so long. It’s time to call them out on this unethical and unfair behaviour.
https://www.change.org/p/stop-plagiarism-in-australian-journalism 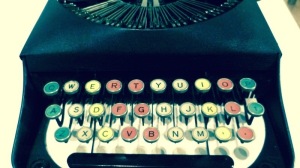 Head on over to Rachel’s List to find the latest analysis from the 2014 Show Me The Money Survey.

More than 40 Aussie freelancers filled in the survey – and there’s great insights to be found.

(Do you agree with this comment on the future of freelance journalism:
The future….“     Technology will overtake me and I will have to retrain/diversify/become a barista/prostitute.”?) 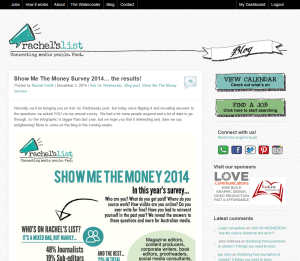 by Fran
Australian photographer Ken Duncan is organising a rally next Sunday 29 August at 10am at Campbell Cove to raise awareness about the eroding rights of photographers in Australia, thanks to laws that prohibit photography without a permit in many public places around Australia.

This has implications for any freelancer shooting pics in many public areas – Sydney Harbour Foreshore Authority and Waverley Council for example have quite nasty restrictions. [oops! I could have been very seriously busted a few times recently!]

Duncan (who made his fortune before today’s regulations were put in place), says that these days, Australian photographers (professional, part-time or amateur) can risk getting a criminal record for taking a picture of a rock.

AFA recently completed a comparative study of legislation and policies imposed on photographers and film-makers within Australia, Canada, New Zealand and the United States of America and found Australian photographers and film-makers were seriously affected by a myriad of rules and regulations that impose prohibitive restrictions, high fees, and bureaucratic application protocols.

Australian freelance journalists: Send us a request to join this group, include a short bio and your contact details and our volunteer group moderators will be in touch. You need to have a Google account and be signed in, first. We'll then respond with your 'Google Groups' invitation. Check this page for information about how the group works.