What rates do freelance journalists get paid in Australia?

The Media Entertainment and Arts Alliance has published a schedule of freelance rates which dates back to October 2019. (No update has been made to these rates since.)

This is the latest schedule and was based on the most recent negotiated enterprise bargaining agreement for employed staff journalists at Fairfax and News Corp at the time, at July 2017.

These have been calculated based on the daily rate that an independent contractor would need to earn, to make the equivalent salary of aJ5* graded journalist on a Fairfax or News Corporation metropolitan daily newspaper. Provisions for annual and sick leave and business administration costs are built into the calculation.

If your business has a turnover of $75,000 or over per year, you are required to register for GST.
Many freelancers don’t know until the end of the financial year whether they will turn over that amount – if you expect to earn $50,000 or more, it is a very good idea to register for GST so that you don’t have to retrospectively pay 10% on invoices charged.

When you are offered a gig, or you quote for a job, make sure that you specify GST in your invoice. Most people will quote a rate (eg $1 per word or $100 per hour) and note that this rate excludes GST.

As a freelancer, the ATO states that you may still be entitled to super. A contractor paid wholly or principally for their labour is considered an employee for super purposes and entitled to super guarantee contributions under the same rules as employees. Rules apply – eg you must perform the contract work personally, be paid per hour, and work directly for an employer not via an agency, company, trust or partnership.

What rates do government and business pay?

The rates quoted above are often paid by not-for-profit, government and private organisations for journalism done in industry.

Copywriters will often charge a higher hourly rate  ($150 to $200 per hour) particularly if they work through an agency.

What rates do publications pay?

Actual rates offered by publishers vary widely. Many publications have not lifted their wordrates in over 20 years. Rates as low as 50c per word still occur in some areas of travel journalism, and some newpapers still pay 65c per word for features.

Some large outlets rely on their high profile and the kudos that comes with having a byline in mainstream publications, to attract freelance journalists, despite their paltry rates. (I’m looking at you, Fairfax and News Corp, and to some extent, the ABC.)

A common / acceptable commercial rate for publications in 2018 is 80c to $1 per word, with specialist publications in fields such as finance, legal and medical paying $1.50 – $2 a word for experienced journalists.

Commissioning editors may offer higher or lower rates, and journalists may command higher or lower fees depending on their experience, expertise and publication budgets.

For a guide to the current rates offered by publications in the Australian market, check out the MEAA’s Rate Tracker – this contains real data updated by freelancers based on their own experience of publisher payments. (You can add your own information to Rate Tracker to help build this useful tool about current market rates.)

The MEAA encourages freelancers to prioritise publishers who pay well. 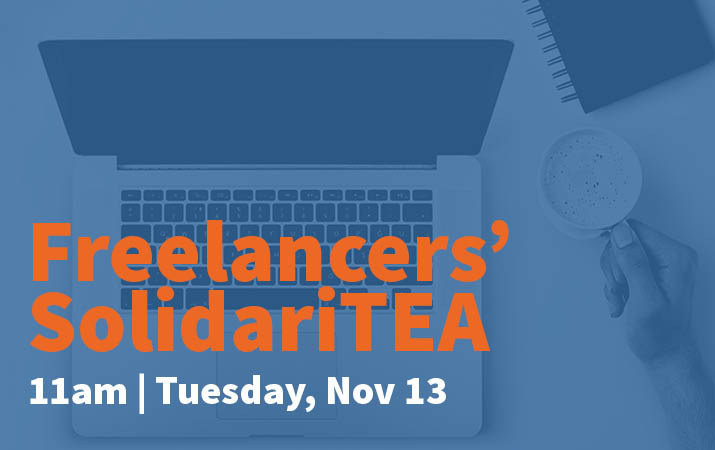 Join other freelancers across Australia next Tuesday for the inaugural MEAA virtual morning tea.

Hosted by the MEAA National Freelance Committee, SolidariTEA will include a discussion and presentations. You can join the conversation by using the ZOOM video conferencing system or simply by dialing in on your phone – details on how to dial-in will be provided when you register.

The format will be a panel discussion of freelancers followed by a Q&A on any industrial questions that you have.

This is a great opportunity to hear the latest developments around freelancing as well as getting answers to your questions about your rights as a freelancer.

For more information call Jenny Farrar 0415 995 745. You are welcome to email your questions in advance to: jenny.farrar@meaa.org – simply enter the words SolidariTEA Question into the subject line.

Please consider signing and sharing this Change petition set up by Ginger Gorman. Many freelance journalists have seen their work being ripped off by unscrupulous publishers and sadly by other journalists. Despite being a clear copyright breach in many instances, it’s up to the person whose work has been copied to prove the case. For large publishers, this means spending time, resources and money on prosecuting a case; for freelance journalists, it’s usually not financially feasible. Those who blatantly copy know they can get away with it – because they have for so long. It’s time to call them out on this unethical and unfair behaviour.
https://www.change.org/p/stop-plagiarism-in-australian-journalism

Many thanks to freelance journalist Jess Mudditt who has compiled this list of Job sites, with comments from Freeline members included.

Apply now for the Walkley Award for Best Freelance Journalist for 2017.

This MEAA Walkley Award recognises “the unique contribution that freelance journalists make across all media platforms to the future of the industry.”

Open to residents of either Australia or New Zealand.

If you’re part of the fascinating freelance journalism discussions happening on the Freeline google group – you’ll know that the whole What should I charge? question comes up again and again.

Short answer:  Most decent publications pay experienced senior journos upwards of 80c per word. Content writers and corporates pay $80 – $150 an hour plus. But there’s lots of hobbyists out there who are happy with 25c a word.
The verdict from the pros?.. Leave the cheap jobs to the hobbyists. If you’re good and you’re experienced and you can meet a brief to deadline, you should be able to command a professional rate.

Here’s some good resources that will give you a feel for going rates:

The earlybird rate ends this Friday –  you can save over $100 on festival tickets.

Do you juggle stories, projects and lists? Are you wasting precious time shuffling between documents, or getting distracted by social media? This half-day workshop explores some simple efficiency and project management techniques and tools, before giving you a comprehensive introduction to the writing software Scrivener.

FREELANCE JOURNALIST OF THE YEAR FINALISTS

Congratulations to the three top Australian freelancers selected as finalists in the 2015 Walkley Award for Best Freelance Journalist of the Year.

The overall winner will be announced in Sydney on July 29.

This year’s awards attracted more than 60 top-quality entries, showing that freelance journalism in Australia is alive and kicking!

Australian freelance journalists: Send us a request to join this group, include a short bio and your contact details and our volunteer group moderators will be in touch. You need to have a Google account and be signed in, first. We'll then respond with your 'Google Groups' invitation. Check this page for information about how the group works.